‘Twenties’ is back for season 2 and you do not want to miss the comedy, drama or tea spilling over from last season.

Is Marie serious about this engagement? Will Nia ever land a big acting role? Will Hattie “know” Ida B. the way Adam knew Eve? Chile, all these questions are getting ANSWERED this season.

The Link Entertainment (TLE) caught up with Jonica “Jojo” T. Gibbs (Hattie), Christina Elmore (Marie) and Gabrielle Graham (Nia) to hear all about what’s in store for this new season.

Spicy is the word that everyone agreed is a great way to describe the upcoming episodes.

“She’s going to be having the time of her life. She’s living the dream, she’s walking in her purpose…Dealing with men too (Tristan) that decide to pop back in her life,” said Graham who plays the role of Nia.

Graham also let it be known that this season fans will get to see her family. Specifically a sister by the name of Vanessa that is played by Nia Jervier.

Elmore’s character, Marie, is giving ‘I Love New York’ vibes. It seems like she always has an option when it comes to her love life. Men are coming from left and right.

“I think Marie would love to see what’s up with Quintrell too, because Quintrell has been giving her the eyes and she wants to follow that. But I think that is such a risk for her,” said Elmore.

At the end of season 1 we see Hattie and Ida B. make up after that tragic firing ordeal.

TLE asked Jojo had she ever been in a situation where her boss or co-worker wanted to be with her. “One time, maybe something happened where somebody I worked with I dated, but yea don’t worry about it.” She refused to give up details but Elmore promised to do some digging and get back with the “tea.”

The season two premiere of “Twenties” airs on Wednesday, October 13 at 10:00 PM ET/PT on BET and BET Her.

Be sure to sit tight at the end of the premiere episode for a new half-hour series titled “Twenties After-Show With B. Scott.” The after-show will provide candid commentary and insights into some of the characters’ mishaps and successes and will feature appearances from the cast. 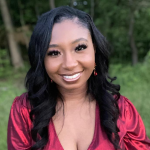 OWN dives into Black Fatherhood with Master P, Marvin Sapp, Derek Luke & Tristan Wilds with ‘They Call Me Dad’