As if Lizzo hasn’t already had an eventful start to the month of April with the release of her new shape ware brand, YITTY and the announcement of her new album, ‘Special.’

She added hosting and performing at Saturday Night Live to her list of accomplishments.

For her musical performance, Lizzo performed two songs from her newest album. The first song that she performed, ‘About Damn Time’ was released earlier last week with a lovely introduction from herself.

Watch her performance below. 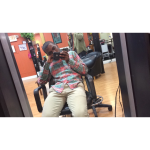